OnePlus has started sending out a new update of Oxygen OS for the predecessors of 8 and 8 Pro. The manufacturer has launched a duo of flagship smartphones this year and priced a premium keeping on par with the Samsung and Apple flagships. The number for the latest update of Oxygen OS for 7T and 7T Pro is 10.3.3, which gets based on Android 10.

The manufacturer also made its efforts to bring out an update for the OnePlus five and 5T smartphones, which got launched five years ago. OnePlus has managed to maintain a great repo with its users in terms of releasing constant updates. Now, the 7T and 7T Pro smartphones received an upgrade with significant improvements in the camera department.

The latest build of Oxygen OS 10.3.3 build for the OnePlus 7T and 7T Pro comprises of Google’s latest security patch, which is for May. The description of the update gives us the brief details of other features in the update. The changelog of the update shows that OnePlus Z Wireless will now get integrated with Dolby Atmos for a better audio experience for the user. 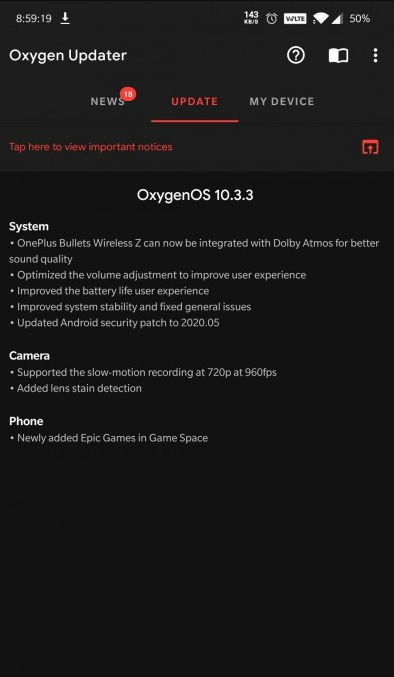 The update also includes the required adjustments for the volume while using media and taking calls. The update also helps in improved battery life and fix the stability of the system for an enhanced and speedway of user experience. The update also made the newly Epic Games integrate right into the Game Space of OnePlus for better gaming performance.

Also Read: Apple’s 2020 iPhones Might Launch In November Due To Delayed Schedule

The two major updates in the camera department of OnePlus 7T and 7T Pro are the device can now record the slow-motion videos in 720p at 960fps. The update has also added a new lens named as “Stained Detection” that informs the user to clean the camera lens in case of any smudges. The device can now also record 4K videos with an ultra-wide lens which is not mentioned in the changelog of the update.