Samsung Galaxy M51 is the company’s next launch and there are many rumors, specifications listing that are coming out to confirm the arrival of the device. The previous leaks were coming from the FCC certification listing which revealed key specifications of the upcoming mid-range smartphone from the manufacturer.

The new listing from Google Play Console has confirmed the rumored specifications of this newly arriving mid-ranger from the Korean manufacturer. The listing has revealed the specifications of the smartphone and given a confirmation for all the previous rumors and leaks of this device.

The Samsung Galaxy M51 will get powered by the Snapdragon 730 chipset. The display will feature a Full HD+ resolution with a centrally-placed punch hole to accompany the selfie camera on the front. The Samsung Galaxy M51 as shown In the listing runs on the Android 10 Operating system with One UI skin on top. 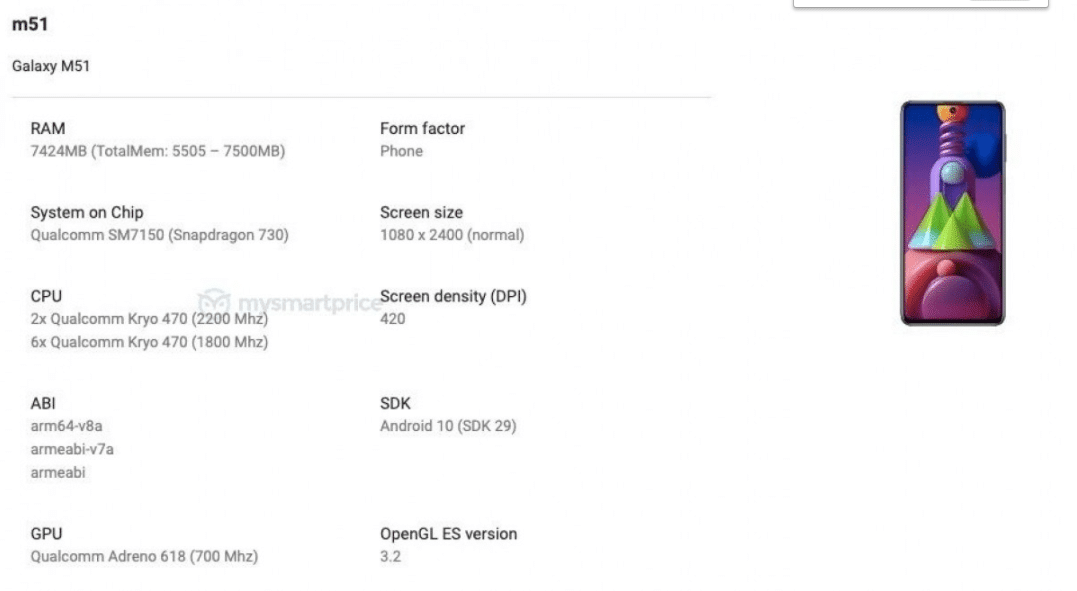 The GPU is the Adreno 618 from Qualcomm paired with the above mentioned 730 chipsets. The smartphone comes 8GB of RAM and there’s no info on the onboard internal storage on the list. The design is going to get similar treatment if compared to the previously launched M-series devices from Samsung.

The listing has made a lead to the fact that the Galaxy M51 is getting closer for launch as the Google Play Console is the final stage for any upcoming smartphone in the industry. The smartphone may likely get sold on e-commerce shopping websites such as Amazon in India as it was found on the website lately.