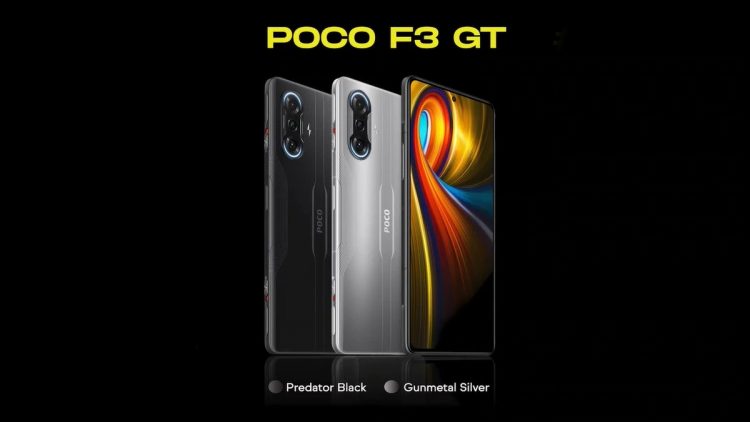 The much anticipated Poco F3 GT finally launched in India with all its glory. It becomes the second F-series phone after the legendary Pocophone F1, released almost three years ago.

The Poco F3 GT will lock horns with the just-announced OnePlus Nord 2 5G, Realme X7 Max 5G, Mi 11X 5G and the iQOO 7 5G. It comes with a few class-leading features, which we will be discussing later in this article.

The Poco F3 GT features a 6.67″ 10-Bit FHD+ AMOLED Display with a 120Hz fast refresh rate and a touch sampling rate of 480Hz. The phone is protected by Corning Gorilla Glass 5 on both the front and back sides. The display can produce over 1 billion colours and supports HDR10+ playback as well. It supports DC-Dimming, which reduces screen flickering at lower brightness levels by inhibiting the amount of current supplied to the display.

Poco F3 GT houses the MediaTek Dimensity 1200 5G processor under its hood, coupled with up to 8GB of LPDDR4X RAM and a maximum of 256GB of fast UFS 3.1 storage. The processor is built on a 6nm fabrication process. In addition to a white graphene layer, it also has an eight layered graphite cooling chamber. On the software front, this phone runs on MIUI 12.5 based on Android 11.

It comes with a triple camera setup on the rear — a 64MP primary sensor, an 8MP ultra-wide lens with a 120 degree-FOV and a 2MP macro sensor for closeup shots. The 16MP selfie camera lies beneath the hole-punch cutout on the front display. It features an extra-low dispersion glass lens, which reduces glare and better light transmission. The device packs a 5065mAh battery, with support for 67W fast charging and USB-PD. The in-box L-shaped cable reduces obstructions while gaming.

Now coming to the unique and cool features of the Poco F3 GT, the list is long. Gaming centric features include MAGLEV triggers, which show up with a switch slide and retract just as fast. There are two U-shaped thin RGB light rings around the camera housing, which also act as a notification LED and give a gaming vibe. It has a dedicated gaming WiFi antenna and a dedicated gaming microphone on board for better audio clarity and network reception while gaming.

Along with a glass back, the phone has an Aerospace-Grade Aluminum Alloy frame. Connectivity features include 4G LTE, 5G, WiFi 6, Bluetooth 5.2, GPS, and the device sports a side-mounted fingerprint scanner along with an Infrared blaster (IR-blaster).

It has dual stereo speakers, with support for Dolby-Atmos. The handset has an ingress protection rating of IP53 and weighs 205 grams. There is no 3.5mm audio jack or a microSD slot.

The Poco F3 GT’s prices are as follows —

Buyers can choose from two colour options, namely Gunmetal Silver and Predator Black. It will be available on Flipkart. Pre-orders start on 24 July 2021, at noon, and the sale begins on 26 July 2021, also at noon.

Introductory offers include a flat ₹1,000 Instant Discount using ICICI Bank Cards & EMI until 29 July 2021. So, what are your thoughts on the same? Let us know in the comments down below.

How To Fix the “Sim Not Provisioned MM 2” Error