It looks like Microsoft might have a chance to dethrone Chrome from the Number 1 spot as it has released a Chromium-based browser named “Edge Chromium.” Built on the “Chromium Engine,” This new browser from Microsoft, Ships independently of the OS, and runs on Android, iOS, Mac, Windows 7, and Windows 10.

Microsoft has been consistently trying to step up its game in the “Game-of-Browsers.” After Windows Explorer ditch it, Microsoft launched a substitute named “Edge” in 2015. Sadly, not many users found Edge to be better than Chrome. Hence, it never gained popularity. A lot has changed in the browser market in the past decade, with Google’s Chrome topping the charts, followed by Mozilla’s revamped Firefox Quantum, the industry has experienced rapid growth with new contenders like Brave, Maxthon also gaining popularity.

What’s new in Chromium Based Edge?

Chromium is a free Open-Source web browser developed by Google, meaning the source code can be used by anyone to build their browser by altering/adding new Code, and that is what Microsoft has done.

It is ironic to see how the browsing speeds of Edge compare to Chrome during Edge’s release. And now Microsoft has built its browser on top of Chromium, Aimed to deliver “World-Class-Performance.” In the demo video, Edge compares with the new Edge-Chromium (again, the Irony) and Edge-Chromium outclassed Edge with almost double the “Runs per minute” (55.6). In contrast, Edge managed to get a score of 27.1. 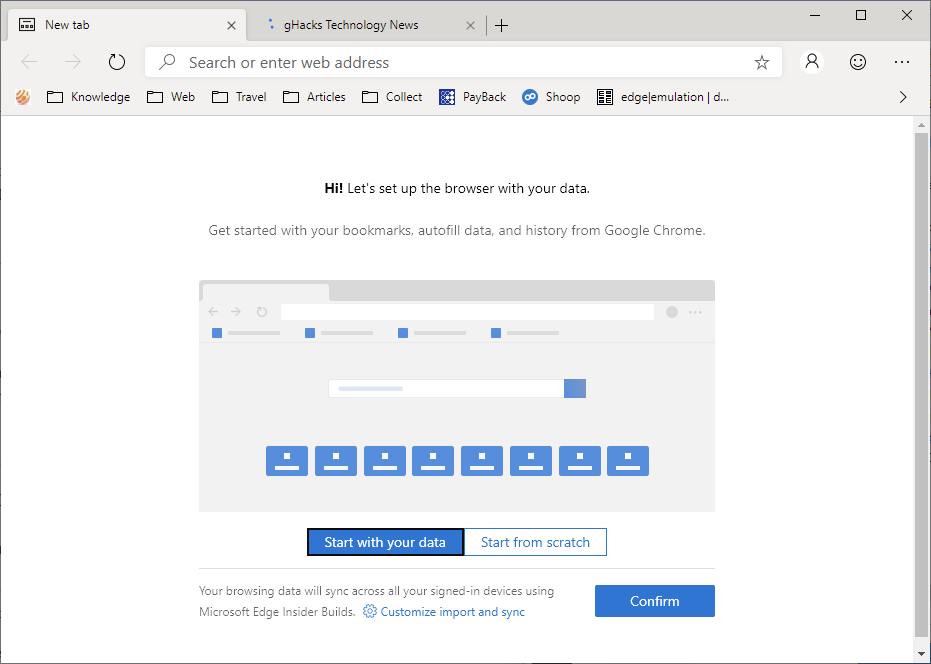 The compatibility score is similar to that of Chrome, with a score of 535 out of 555. On the performance front, a new personalized homepage suggests websites that you’d like to visit by considering your browsing history. The browser also includes support for legacy sites where the Internet Explorer is used if Edge-chromium cannot load it.

Your data is safe and can no longer be tracked. Privacy and Security are top concerns for users, and Edge-Chromium comes with “Trackers Blocker” behind the scene. Searching for answers has been made easier with Bing.

Users can now save the products they want to purchase inside Edge and share it instantly/ Make an Excel Sheet view of it or make a PDF copy. You will no longer be logged in while in Incognito as it has revamped, and your search history will be limited to your system only.

Microsoft has also put in a lot of effort to connect the Internet with the Intranet. The new Edge can now access your reminders, view your schedule, etc. by accessing the files on your computer, Contacts, and all the other essential data. There are three tracking modes Basic, Balanced, and Strict.

The UI is good to that of Google Chrome (Since it’s built on top of Chromium). You will not be surprised if you’re a regular Chrome user. One more unique addition to the list is the ability to install native web apps like chrome allows us to do on Android.

Microsoft did a good job with the new Edge. While the Chromium-like feel is noticeable, the number of features that Microsoft has managed to put in it is quite impressive. The sheer amount of focus placed on privacy and security is good, and we have already started to see this as a great alternative to Chrome. Microsoft has announced it will be bringing a bunch of new features to their modern browser, but the ETA is still unknown.