According to the Japanese media report, the new Xperia flagship product will officially announce at MWC 2020 on February 24. The Sony Xperia 1.1 will be the successor of Xperia 1, and it will come with the Snapdragon 865 SoC. From speculations, this device will also use a 4K HDR OLED display and supports the 5G network.

The latest camera phone leaks suggest it could boast a different camera setup to anything we’ve seen from Sony before, bringing it in line with the upcoming Samsung Galaxy S20 and phones like the Huawei P30 Pro.

Now, thanks to a leak from Android Next, a close-up image of the camera surround has a full breakdown of camera specs, complete with resolutions and sensor sizes. 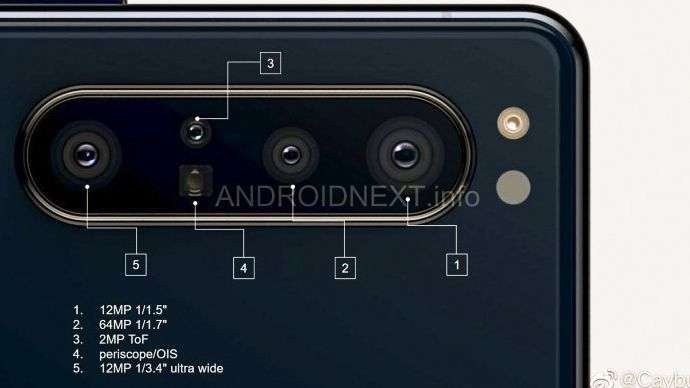 The Sony  Xperia 1.1 will reportedly pack five rear cameras. If this information is accurate, the rear camera setup will be as follows. There is a 12-megapixel primary camera, a 64-megapixel camera, a 12-megapixel ultra-wide-angle camera, a 2-megapixel Time-of-Flight camera. And finally, a periscope unit with OIS and an undisclosed focal length and resolution.

Leaked renders of the new Xperia included some interesting shapes within its camera array when they surfaced not long ago. Still, there was no clarification as to what features were cameras, focusing elements, color temperature sensors, or other non-picture-taking components.

We’ve never seen a periscope module quite so unimposing before.  Sony needs to make waves if it wants to stay in the race, and these suggested specs do – so check back in February when everything will reveal.