Realme has plans to introduce a new lineup of smartphones. The V-series will get debuted with the first smartphone from the manufacturer as V5. The device is all set to launch on August 3, in China, and there are already many leaked pictures and specification details of this smartphone.

The manufacturer has recently launched devices such as X3 SuperZoom and X3, which also come under the same mid-range category. This time, instead of Qualcomm’s chipsets, Realme has chosen the Mediatek chipset in the upcoming V-series smartphone that got revealed on the Geekbench listing for the Realme V5 smartphone.

The GeekBench listing has revealed the Single-core and Multi-core scores of the smartphone that 2,493 and 6,555, respectively. The model number of the device, as per the listing, is Realme RMX2111 that is powered by an octa-core MediaTek Dimensity 720 processor coupled with 6GB of RAM. 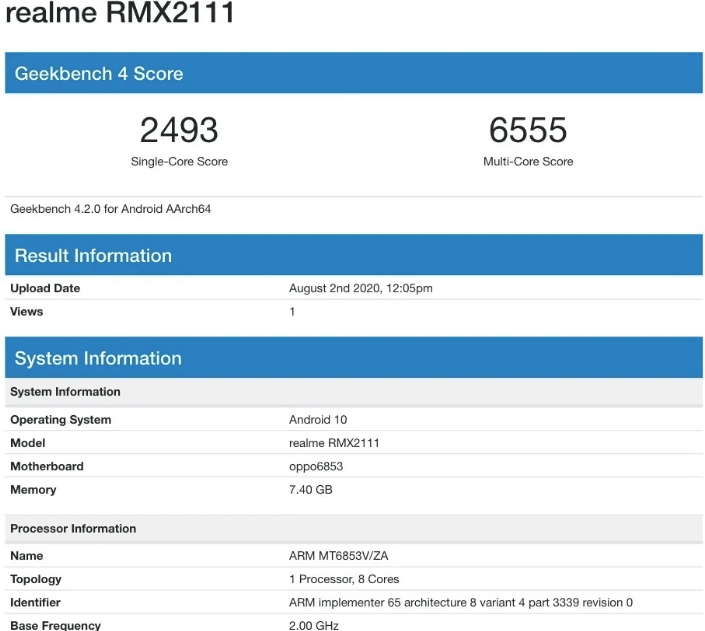 The Realme V5 will run on the latest Android 10 Operating System with Realme UI skin on top. The display is expected to feature a single punch-hole selfie camera and supports a 90Hz refresh rate on the IPS panel. The smartphone features a side-mounted fingerprint sensor placed on the power button.

The device packs in a 5,000mAh battery that gets support to a 30W fast charging through the USB Type-C port and there isn’t much information about the smartphone’s arrival in India, and it’s pricing. The smartphone is getting announced tomorrow, and we can get more information on storage and price details of the V5 smartphone.