Realme Narzo 30 and Narzo 30 5G Launched in India with 90Hz Displays, and More 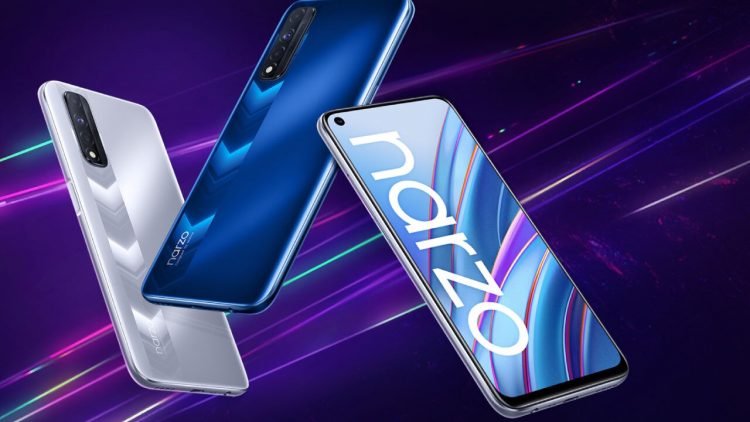 On 24th February 2021, Realme India launched the Narzo 30A and the Narzo 30 Pro 5G. Today, after exactly four months, the company announced two new additions to the Narzo 30 series- the Realme Narzo 30 and Narzo 30 5G.

Both phones being quite similar, have a lot to offer- 90Hz displays, 48MP cameras, 5G connectivity and more. These phones will compete with the brand’s number series, i.e. Realme 8 and Realme 8 5G, along with Redmi’s best-selling Note 10 and Note 10S, Moto G40 Fusion and the Oppo A53s 5G.

Starting with the standard Narzo 30, it features a 6.5″ Full HD+ IPS LCD panel with a 90Hz fast refresh rate. Brightness levels can reach up to 580 nits, and the device has a pixel per inch density of 405. With the selfie camera cutout to be present at the display’s top left corner, the device has a screen to body ratio of 90.5%. In addition, the front display has Dragontrail glass for protection.

Realme Narzo 30 houses the Mediatek Helio G95 chipset based on a 12nm fabrication process, with up to 6GB of LPDDR4X ram-type paired with 64GB or 128GB of UFS 2.1 storage. Talking about the software, Narzo 30 runs Realme UI 2.0 based on Android 11 out of the box. With that, it offers a side-mounted fingerprint sensor for biometric authentication along with AI-based face unlocking.

Realme Narzo 30 packs a 5000mAh cell, and when charged via USB Type-C with its proprietary 30W Dart charger, it can go from 0-100% in 65 minutes straight. In addition, it supports WiFi 5, Bluetooth 5.0, NFC, GPS, GLONASS, single mono speakers, a triple sim card slot and a 3.5mm headphone jack. The device weighs 192 grams.

Talking about the Realme Narzo 30 5G, most things are pretty similar to its sibling launched today. It offers a 6.5″ IPS LCD panel with a 90Hz fast refresh rate, 180Hz touch sampling rate and pixel per inch density of 405. In addition, it can reach a brightness level of 600 nits and has Dragontrail glass on top for protection.

Realme Narzo 30 5G has Mediatek’s Dimensity 700U 5G processor based on a 7nm fabrication process with 6GB of LPDDR4X ram-type and 128GB of UFS 2.1 storage. It features Realme’s DRE technology, which converts ROM into RAM for more RAM space. With a dedicated sim card slot, the storage can be increased by 1TB using a micro-SD card. On the software side, it runs the same Realme UI 2.0 based on Android 11 out of the box and secured by a side-mounted fingerprint sensor and AI-based facial recognition. In addition, the supported 5G bands are- n77/78/38/40/41(2496-2690MHz)/1/3/5/7/8/20/28.

It shares the same camera setup as the Narzo 30, including a primary 48MP sensor, a 2MP macro sensor and a 2MP B&W portrait lens. On the front, the story continues in the same way- a 16MP Sony IMX 471 selfie snapper with an aperture of f/2.1. It can record videos in 4K at 30fps on the rear and 1080p at 30fps on the front side.

Like its sibling, it packs a 5000mAh cell that charges with USB Type-C, but the charging speeds are capped to a maximum of 18 watts only. Connectivity options include Bluetooth 5.1, WiFi 5, GPS, GLONASS, and of course- 5G as well. It has a single mono speaker and a 3.5mm headphone jack as well. The device weighs 185 grams.