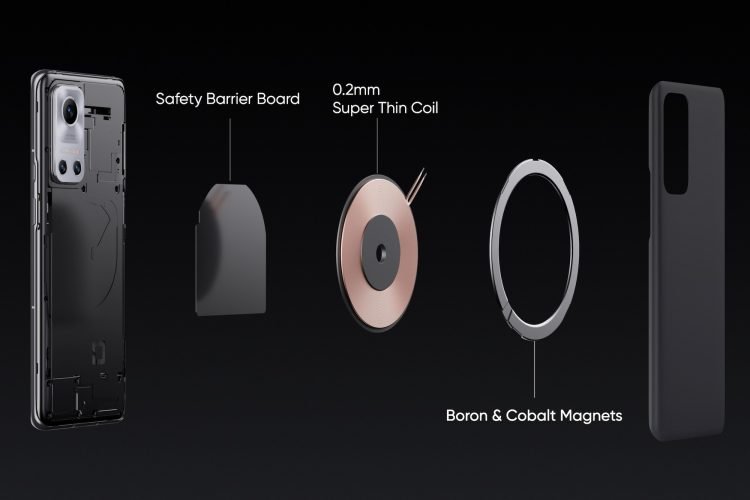 Realme just winded up their Magnetic Innovation event and left us with the Android’s first-ever Magnetic Wireless Charging, and not to mention six other Magnetic accessories. The Apple-inspired MagDart charging technology has some pretty broad claims that we’ll discuss in this article.

Giving you a glimpse of what’s ahead, Realme launched an array of seven products in total, which include the MagDart wallet, MagDart power bank, MagDart beauty light, and of course, the MagDart magnetic wireless charger.

It should be pretty clear by now that this was the star of the show for the most part. The Realme MagDart charger comes in two variants, one of which can deliver 50W of charging output, whereas the other can provide 15W output at max. The 50W MagDart charger is the world’s fastest Magnetic Wireless Charger. At the same time, the 15W variant is the world’s Thinnest Magnetic Wireless Charger.

The 50W MagDart is almost as big as a block of cheese, which explains how it can push out such a high amount of wattage. Realme has also incorporated a compact cooling fan inside it, the function of whose being self-explanatory. Realme says the extra-large low impedance copper coil can charge a phone as fast as wired charging whilst gaining less temperature. Claimed time for filling up a 4500mAh battery is 54 minutes, which is praiseworthy.

On a side note, Realme also announced the Realme Flash concept phone, the only phone to support MagDart charging. The specs of Realme Flash are still a mystery, and the only feature we know about is its 4500mAh dual-cell battery. The 15W MagDart charger uses the same Boron and Cobalt magnets as the 50W variant, with less than 0.1% magnetism decay after two years of usage.

Realme claims the 15W variant to be faster than Apple’s MagSafe charger, and it can juice up the Realme Flash in 90 minutes flat. The 15W MagDart charger has a coil and board separated design, which means that its mainboard is present in the charging plug instead of being inside the magnetic pad, making it the world’s thinnest magnetic wireless charger.

Admit it or not, this one’s also Apple-inspired for sure. The MagDart Power Bank boasts an aluminium frame and a vegan leather finish on the inner side to prevent the phone’s back from getting scratched. Once attached, the phone will start charging automatically, something like Apple’s MagSafe Battery Pack. Realme didn’t disclose its charging speeds in the event.

For those social media enthusiasts out there, Realme has something for you as well. Taking smartphone ring lights to a whole new level, the MagDart Beauty Light will attach to the back of the phone and can be used while taking selfies and pictures from the rear camera.

It adopts a flip mechanism, and the square panel houses 60 mini LEDs. The Beauty Light has adjustable brightness levels and different colour temperature modes to get that perfect flavour of light.

Keeping the Apple inspiration aside, the MagDart Wallet also acts as a 2-in-1 accessory, being a cardholder and a kickstand at the same time. The silver-coloured aluminium kickstand looks seamless with the vegan leather finish of the Wallet.

The subtle Realme branding looks clean. Functionally, the MagDart wallet can hold up to three cards simultaneously, and it attaches to the back of a phone magnetically like every other accessory.

For readers who’ve made it this far, here’s some freshly baked news for you. The Realme GT and the Realme GT Master Edition will be launching in India on the 18th of August, 2021. Nonetheless, the Realme GT will support MagDart charging and MagDart accessories using a proprietary case.

It is a carbon bumper case, which connects to the phone via the USB-C port. The case has magnets inside it to support MagDart charging and accessories. There’s a small bump on the bottom part of the case, which raises slight concern about the attachment of the MagDart Power Bank.

In the end, Realme also unveiled their MagDart Fusion plan. Under this plan, Realme will incorporate MagDart technology on some of their future smartphones, AIoT devices and accessories. Safe to say, Realme is looking forward to building an ecosystem.

That’s it! These were pretty much everything that Realme announced today. We are happy that MagSafe technology won’t remain exclusive to Apple anymore, and Android users can now hope other companies can start developing such things for their products.

So, what do you think of the Realme MagDart technology? Do let us know your thoughts in the comments down below.