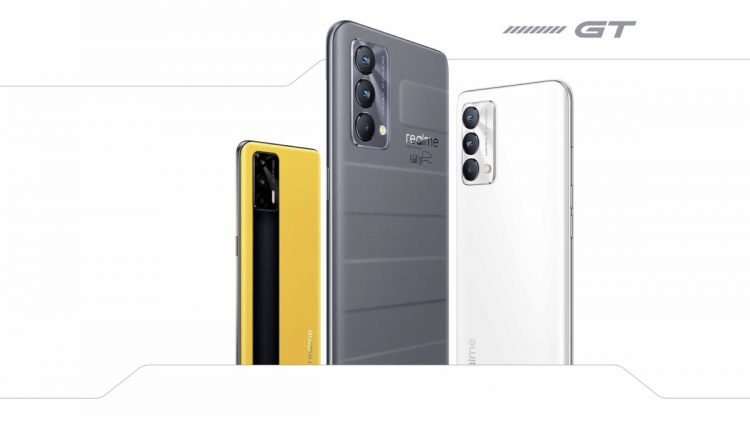 Realme India uncovered its GT lineup today, and as per their claims, this series will be the next “Flagship Killer” for the rest of 2021. Also, the company confirmed that the GT series would replace the X series. Targeting the core performance enthusiasts, let’s look at what the GT series has to offer.

The Realme GT features a 6.43″ FHD+ Super AMOLED Display with a 120Hz fast refresh rate. The resolution is 1080 x 2400 pixels, and with that, it has a 360Hz touch sampling rate. There are three colour options available — Racing Yellow (Vegan Leather Back), Dashing Silver and Dashing Blue. The Vegan Leather variant is slightly thicker than other versions, but either of them weighs around 186 grams.

The main spotlight attribute of the Realme GT 5G is its processor — Qualcomm Snapdragon 888 5G. One can choose from 8GB or 12GB of LPPDR5 RAM and up to 256GB of UFS 3.1 storage. There’s a Stainless Steel Vapour Cooling system to prevent the SoC from overheating. The device runs on Realme UI 2.0 based on Android 11. Connectivity features include 5G, 4G VoLTE, Wi-Fi 6, Dual-SIM 5G, NFC and Bluetooth 5.2.

A 4500mAh battery backs the Realme GT, paired with 65W SuperDart Charger. The in-box charger can fill up the battery in 35 minutes flat. Other attributes of the Realme GT include a dual-nano sim card slot, stereo speakers, 3.5mm headphone jack, in-display fingerprint scanner and an AI-based facial recognition system. In addition, the Realme GT has support for thirteen 5G bands.

The Realme GT Master Edition is similar to the vanilla Realme GT in terms of display, i.e. the GT Master Edition features a 6.43″ FHD+ Super AMOLED Display with a 120Hz fast refresh rate. The panel can reach a peak brightness level of 1000nits in auto-brightness mode. Also, it has a touch sampling rate of 360Hz.

Realme’s Master Edition smartphones come with unique designs, and this one’s no different. This time, the designer — Naoto Fukasawa, was inspired by a suitcase, thus the design on the phone’s back. Other colours apart from the Voyager Grey variant do not include this vegan leather design language. In addition, the 6GB+128GB variant comes only in this colour option.

After the Moto Edge 20, the Realme GT Master Edition becomes the second phone in India to come with Qualcomm Snapdragon 778G 5G processor. There’s 6GB or 8GB RAM onboard, along with 128GB or 256GB of storage. On the software front, the handset runs on Realme UI 2.0 based on Android 11. There are eight supported 5G bands. Other connectivity features include Dual-SIM 5G, Bluetooth 5.2, Wi-Fi and NFC.

The battery capacity is slightly shrunk and is now a 4300mAh cell. On the bright side, the phone supports the same 65W SuperDart charge, which can fill up the battery in a mere 33 minutes. Other characteristics include an in-display fingerprint scanner, mono speakers and an AI-based facial recognition system.

Colour choices on the Realme GT include Dashing Silver and Dashing Blue on the base variant, whereas Racing Yellow (Vegan Leather Back) on the top variant. At the same time, Realme GT Master Edition will be available in Voyager Grey (Vegan Leather Back) across all variants. In contrast, the Luna White and Cosmos Black colours are reserved for the higher variants.