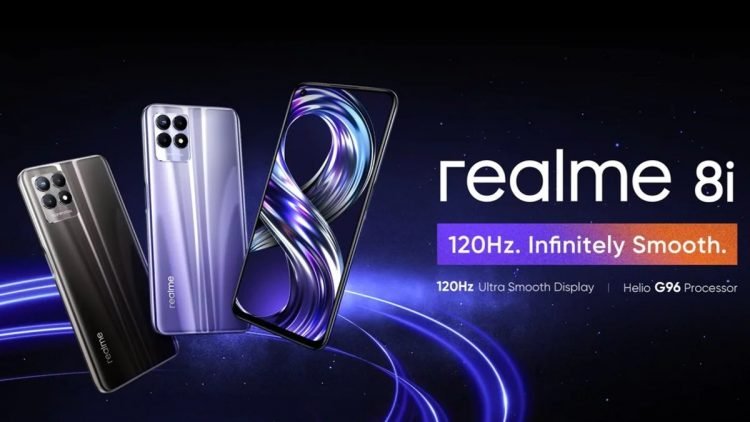 In an online-only launch event organized by Realme India today, the company announced two new additions to the Realme 8 series, alongside Realme Pad. The Realme 8i and Realme 8s 5G are hopefully the last devices to launch under the Realme 8 series, implying that the Realme 9 series should arrive before the festive season.

Judging the bloom in the tablet industry in India, Realme Pad emerges as a contender in the Samsung and Lenovo-dominated tablet market. The same starts at ₹13,999 and goes all the way up to ₹17,999.

The successor to the Realme 7i sees an upgrade in its display and now comes with a 6.6″ FHD+ IPS LCD panel. The screen has a variable refresh rate of up to 120Hz, automatically adjusting itself depending on the situation. Its brightness can go as high as 600nits; however, it can also lower itself to 1nit — the first of its kind.

MediaTek Helio G96 is what we’re dealing with here. The Realme 8i marked its debut today, and the SoC pairs up with a maximum of 6GB LPDDR4X RAM and up to 128GB of UFS 2.1 storage. MediaTek Helio G96 is built on a 12nm fabrication process and has an integrated Mali-G57 GPU. Also, it runs on Realme UI 2.0 based on Android 11.

Coming to the cameras, there’s a triple camera setup on the rear end. Specs read out a 50MP primary camera, a 2MP macro lens, and another 2MP depth sensor. On the front, the cornered punch-hole cutout houses a 16MP selfie snapper. The handset also comes with some fancy camera modes like Dual-Video mode, Chroma Boost, etc.

A 5000mAh battery backs up the smartphone. It also comes with an in-box charger that can charge the phone at 18W. Other handset features include Dynamic RAM expansion (DRE) up to 11GB, Bluetooth 5.1, Wi-Fi, a side-mounted fingerprint sensor, 3.5mm headphone jack, single loudspeaker, etc.

The Realme 8s 5G features a 6.5″ FHD+ IPS LCD panel with a 90Hz fast refresh rate; the same can be seen on most other 5G phones in this price range. Like the Realme 8i, its brightness can also reach 600nits; however, it doesn’t go down till 1nit.

The Realme 8s 5G comes with MediaTek Dimensity 810 5G and thus becomes the first phone in India to offer it. One can choose from 6GB or 8GB of LPDDR4X RAM coupled with 128GB of UFS 2.1 storage. On the software front, it also runs on Realme UI 2.0 based on Android 11. It offers five 5G bands in total.

Camera specifications on the Realme 8s 5G include a 64MP primary camera, a 2MP macro lens, and a 2MP depth sensor. On the front side, the Realme 8s 5G has a 16MP selfie camera. Some camera modes include Portrait Mode, Panoramic View, AI Beauty, HDR, Face-Recognition, Super Nightscape, etc.

The Realme 8s 5G packs a 5000mAh cell that can charge at 33W using the bundled charger. Like the Realme 8i, it also features DRE or Dynamic RAM expansion up to 13GB on the 8GB RAM variant and 11GB on the 6GB RAM variant. The handset has a side-mounted fingerprint scanner for biometric authentication.

Realme Pad has the MediaTek Helio G80 under its hood. With that, there’s 3GB or 4GB RAM and up to 64GB of expandable storage. The octa-core processor is based on a 12nm fabrication process and has an integrated Mali-G52 GPU. It runs on Realme UI for Pad based on Android 11.

Cameras are probably the least used things on a tablet, and thus, the not-so-fancy-sounding camera setup includes just a single 8MP camera. The Realme Pad has an 8MP wide-angle selfie camera for video calls and casual stuff on the front.

The Realme Pad is large enough to fit in a 7100mAh battery which can charge at 18W. Connectivity features include Wi-Fi, Bluetooth 5.0, and 4G on the LTE variant. It houses Dolby Atmos Quad speakers to provide an immersive experience.

The handset will be on sale from 14th September 2021, at noon via Flipkart, Realme India online store, and retail outlets. Introductory offers include ₹1,000 off for HDFC Bank and ICICI Bank customers.

At noon, it will be available via Flipkart, Realme India online store, and retail stores from 13th September 2021. Introductory offers include flat ₹1,500 off on paying online through HDFC Bank and ICICI Bank cards.

The Realme Pad starts at ₹13,999 for the 3GB+32GB Wi-Fi only variant (coming soon), ₹15,999 for the 3GB+32GB Wi-Fi+LTE variant, and ₹17,999 for the 4GB+64GB Wi-Fi+LTE variant. It will be available in two color options — Real Gold and Real Grey. It goes on sale from 16th September 2021, at noon via Flipkart, Realme India online store, and retail outlets. Introductory offers include an instant discount of ₹2,000 on paying through HDFC Bank Credit cards, Debit cards, and Easy EMI. ICICI Bank credit card users can avail of an instant discount of ₹1,000.

OnePlus Buds Z2 Might Launch in India in October