OnePlus Nord has made to news a lot in recent times due to its promotions and series of leaks on social media. As the launch date is getting closer, the company is revealing the features every other day to the public. The pre-orders for the smartphone have already kickstarted in some European countries and India.

This upcoming smartphone from OnePlus is the most awaited device because of the expected lower price tag. It’s OnePlus’s New Beginnings that’s making a lot of noise around the web for its unique approach and AR launch that is going to take place on a live event on June 21. Now, the full specification details of Nord have surfaced.

OnePlus has previously revealed that they were going to use the Snapdragon 765G processor on the Nord. Recently they have also shared a meme that cleared the haze on the type of display using on the device. The smartphone is going to make use of the AMOLED display, which gets equipped on its flagship devices usually. 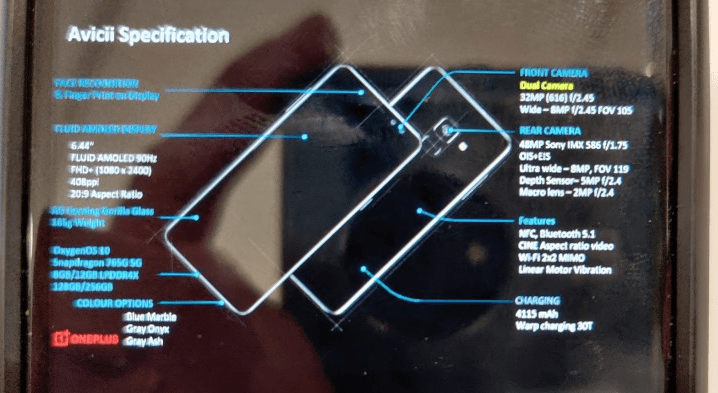 The specifications were sourced by the reliable leaker Evan Blass who has published an image that got used for a presentation event. The complete details of the OnePlus Nord were present on this presentation image, including the three color options which are Blue Marble, Gray Onyx, and Gray Ash.

The smartphone will sport a 6.44-inches display with a pixel density of 408 PPI and comes with 90Hz refresh rate support. The device’s fingerprint sensor is an under-display unit as its an AMOLED screen. The rear contains a Quad-Camera setup that comes with a 48MP primary, 8MP ultrawide, 2MP macro, and 5MP depth sensor units.

The OnePlus Nord comes with a 4,115 mAh battery capacity, which has support for 30W fast charging. The device weighs around 185 grams and has all the connectivity features such as Bluetooth 5.1, NFC, and Wi-Fi 2×2 MIMO. There is no official information about the pricing but rumored to launch under $500 as its a mid-range.