A fantastic tablet for most people! 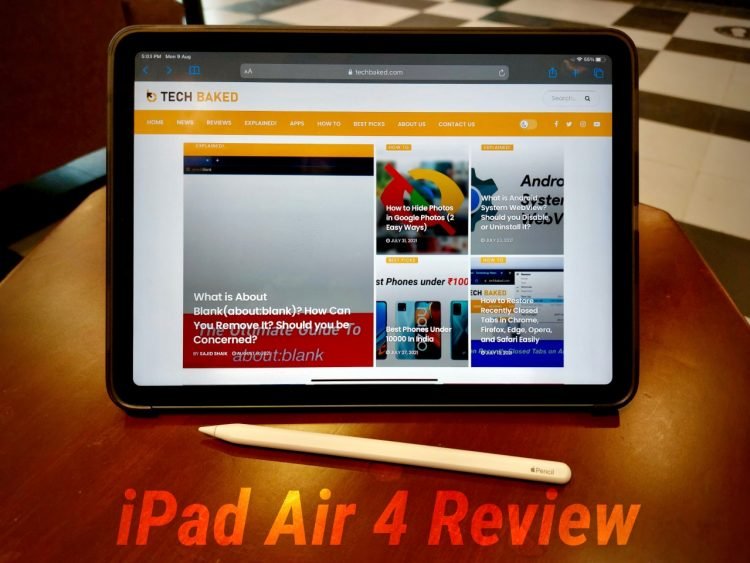 The iPad Air 4 is currently the best in the iPad lineup for those who want Pro-like features but do not want to shell out an extra 17,000 INR for the iPad Pro.

Before we get onto everything else, let us first get the specifications and price out of the way.

From the front, the iPad Air 4 looks indistinguishable from the iPad Pro with just a couple millimeters for bezel extra which provides a 10.9″ display instead of an 11-inch display in the same body size. Put them side by side and at first glance, this difference is noticeable only with the help of a ruler. Also, unlike the iPad Air 3, the new iPad Air comes with black bezels for all colorways.

From the back, the new iPad Air again looks virtually indistinguishable from the 2018 iPad Pro, with the only differences being the size of the camera bump and the fact that the iPad Air 4 doesn’t have a flash. Even the antenna lines on the cellular models are identical.

Just like with the iPhone 12 and 12 Mini, Apple has given tons of colors to choose from on the iPad Air 4, 5 of them to be exact. The color options include Space Gray, Silver, Rose Gold, Sky Blue, and Green. This brings a fun twist to the iPad Air 4 and also helps distinguish it from the iPad Pro lineup.

The iPad Air 4 display is fully laminated and maxes out at 500 nits brightness which is plenty bright even under direct sunlight. Unlike the iPad Pro, the current iPad Air 4 doesn’t have ProMotion and maxes out at a 60 Hz refresh rate. This shouldn’t be a deal-breaker to those who haven’t used devices with high refresh rates, however for those of you who have, you can definitely notice the difference between a 60 Hz panel and a 120 Hz panel.

Just like the iPad Air 3 and the current iPad Pro lineup, the new iPad Air also has the P3 Wide color gamut and true tone which adjusts the white point of a display based on ambient lighting. The iPad Air 4 displays colors accurately and is one of the best LCD panels. Speaking of which, it does have the downsides of an LCD like a relatively lower contrast ratio compared to OLED panels. What this means is that the display cannot display deep blacks, an OLED display can.

The iPad Air 4 packs in Apple’s A14 Bionic which makes the Air 4 blazing fast, second only to Apple’s M1 chip. Compared to the 2020 iPad Pro, the Air 4 packs in 2 fewer cores but almost makes up for it with its higher clock speed. Compared to the 8 cores at 2.49 GHz with the A12Z, the A14 bionic with its 6 cores clocks in at 2.99 GHz. This means that the iPad Air is a beast with all single-core tasks but falls behind the A12Z for anything that requires more cores like editing videos and photos etc.

iPad Air 4 also comes with 4GB of RAM which along with Apple’s amazing RAM management means that no app will have to reload and the iPad doesn’t stutter one bit. This is less than the 6 GB of RAM on the 2020 iPad Pro however unless you are multitasking with really heavy apps you won’t notice the difference.

Despite the significant jump in performance with Apples’ M1 iPad Pro, the lack of pro apps supports like Final Cut Pro (FCP) even on Apples’ latest iPadOS 15 means that you cannot go wrong with the A14 on the iPad Air 4.

The iPad Air 4 came with iPadOS 14 out of the box, the latest no beta update being iPadOS 14.7.1. Developers and also install the iPadOS 15 Beta on their iPad Air 4.

iPadOS 14 came with a major redesign just like iOS 14 and macOS Big Sur. iPadOS 14 came with support for widgets, Siri got an updated compact UI. iPadOS 14 also came with scribble support which lets you hand-write with your Apple Pencil onto any text bar and it automatically gets converted to text. You can also cut and copy anything you write in apps such as “Notes”. iPadOS 14 also let you change the default email and browser app for your iPad. Earlier, only Safari and Apple Mail could be your default browser and email apps respectively.

But how is it like to actually use iPadOS 14? First, let me get the things that bug me the most on iPadOS. The iPad still doesn’t have a default calculator or weather app. The only options are to either download third-party apps from the App Store or ask Siri using “Hey Siri”.

Another thing that bugged me is the multitasking UI, iPadOS only lets you open two apps side by side, even if you wanted to you cannot place one app at the top and the other at the bottom. Samsung’s Galaxy Tabs in this case offer much better multi-tasking, you can open 3 apps at once: one on the left, one at the bottom right, and one at the top right. You can also open any number of apps as pop-ups.

Now for some of the things, I like about iPadOS 14. The new widgets are a good addition and have been something that has been missing on iPadOS for a long time now. Most of the apps are optimized for the big screen on the iPad. Although there are some notable exceptions such as Instagram. FaceTime calls also appear as notifications on the top instead of taking over the entire screen.

iPadOS 14 also added new privacy features. Now, whenever you open an app for the first time, you can ask the app not to track. This means that the App cannot use the System Advertising Advertiser which is used for tracking your activity to display relatable ads.

iPadOS 14 now also supports the trackpad if you are using the Magic Keyboard. Plenty of third-party apps have added support for trackpads on iPads such as Microsoft Office. Touch is still the most convenient way to use the iPad but it is nice to see Apple improving the trackpad/mouse support.

People mostly use cameras on a tablet for document scanning. Only a select few actually click day-to-day pictures with their iPad. The iPad Air 4 has still seen a nice little jump in camera quality compared to its predecessor. The iPad Air 4 now comes with a 12 MP camera with an f/1.8 aperture. This means more detail and better photos in low-light.

The iPad Air 4 can now also take videos up to 4K 60 fps. The camera on the Air 4 now has the same specs as the camera on the new iPad Pros, however, the Air misses out on the ultrawide and LiDAR sensor.

The iPad Air 4 takes crisp shots with good color and dynamic range. However, it is nothing out of the ordinary and is in line with the Camera Performance of Android tablets in this price range. In low light, the iPad Air 4 suffers, losing a lot of detail.

In typical Apple fashion, Apple did not share the official size of the iPad Air 4 battery. It, however, said that the battery should last around 10 hours and the battery life on my iPad Air 4 comes pretty close to Apple’s estimate.

You can use the iPad for about 9-10 hours with standard usage. However, heavy usage such as photo editing or running graphically intensive games does bring the Screen on Time to about 5-6 hours on the WIFI edition. If you get the Cellular version, expect the Screen on Time you get to be a little less.

Unlike with the iPhones, Apple does include a 20W charging adapter with the iPads. The brick included in the box can charge the iPad from 0% to 30% in about half an hour.

Should you buy the iPad Air 4?

The iPad Air 4 doesn’t bring anything new to the iPad lineup. However it does bring many of the pro features users wanted for a price that isn’t as likely to make a whole in your pocket as the more expensive iPad Pro lineup.

While the Air 4 wont tempt any power hungry users who are looking for laptop replacements, they should surely go to towards the iPad Pro lineup. The new Air 4 however doesn’t bring a lot of what made the Pro series great for a cheaper price that is more likely to tempt normal users who might occasionally do something heavy and processor intensive on their iPads

The iPad Air 4 also brings a colorful new redesign to the iPad Air lineup, this makes it a great tablet for media consumption with the screen taking almost the entire front. The dual stereo speakers on the Air 4 are also great for watching movies or shows with friends and families.

Read More of our Articles:

The iPad Air 4 doesn’t bring anything new to the iPad lineup. However, it does bring many of the Pro features users wanted for a price that isn’t as likely to make a hole in your pocket as the more expensive iPad Pro lineup.

We collect information from many stores for best price available