Asus as a smartphone maker has slowed its pace compared to previous years in launching its latest smartphones. The products which made headlines for the manufacture were the ROG gaming phone, which was acclaimed critically and was liked by tech enthusiasts. They even introduced a bunch of accessories for better performance.

The next phone they launched was a flagship from Asus called Zenfone 6, which later got their name changed as Asus 6z in India. The device was launched in May 2019 with a pop-up selfie camera and high-end specifications as every flagship does. It seems like the company planning a successor for the 6z as the latest 7z got spotted.

The upcoming flagship from the Taiwanese manufacturer first spotted on the Geekbench benchmarks. The device made an appearance on the Geekbench 5 application and got caught with a name called ‘Asus ZF.’ The smartphone can be the first 5G supported handset from the company. 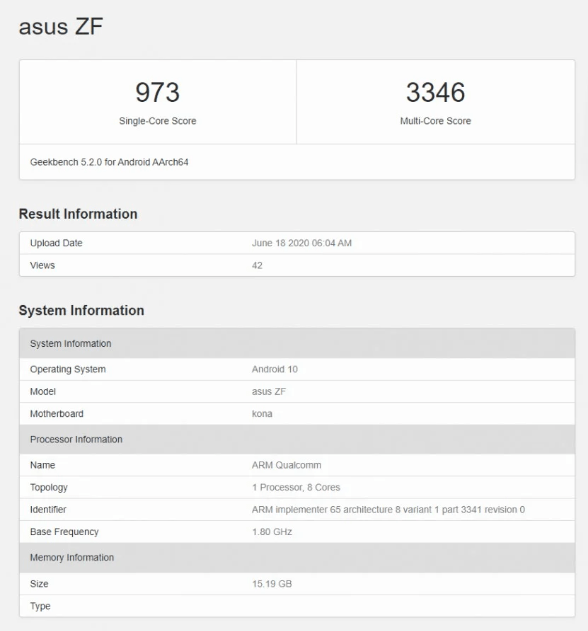 The screenshot presented here gives us brief information about this upcoming flagship device. As we call it a flagship, the Zenfone 7 will feature the Snapdragon 865 SoC, and the codename of the motherboard named ‘Kona.’ The Geekbench score mentioned a massive 16GB of RAM, where we can expect an excellent performance.

An SD865 processor is an 8-core unit that comes with a frequency of 1.8Ghz. The scores shown in the Geekbench are pretty incredible as the scored 975, and the multi-core has scored 3346 in the benchmark tests. These are the mentioned specifications and benchmark details of the upcoming flagship smartphone from Asus.

Asus has made plans to launch its flagship successor of ROG series, ROG Phone 3, in July 2020. This upcoming gaming beast’s specifications and images surface on TENAA certifications. It is a fully-loaded flagship range smartphone and has scored an exceptional score of 646,310 on the AnTuTu benchmark.