Android 11 Is Coming Soon To Thrill and Dominate Your Phones!

It has only been seven months since the release of Android Q, and it looks like Google has started working on its next big version, Android 11 (R). A recent GeekBench listing showed us a Pixel 4 running Android R. Yes, GeekBench results could alter, and we suggest you take this report with a pinch of salt.  With Android Q, Google ditched the Desserts naming scheme and replaced it with numerical as they believed it is more “Comprehensive” and “Easy to remember.” The fact that the report has Android “R” instead of “11” makes us more skeptical about its authenticity. 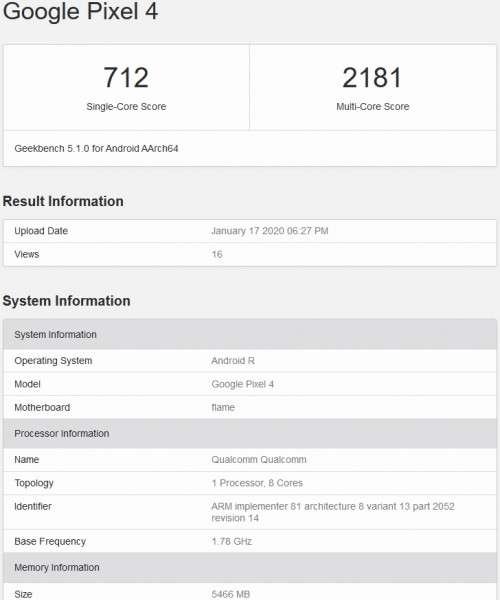 With a Single-core score of 712 and a Multi-core score of 2181, the numbers reflected are of a typical Snapdragon 855 powered smartphone. Google has been pretty good at keeping calm about Android releases in the past, and this is the first information of Android 11 that we have seen so far. Google announced that recording videos above 4GB would finally be made possible in Android R, and that is the last time we heard about Google speaking about Android R publicly.

Android Q’s Developer preview was released in March 2019, followed by the stable release in September 2019. We might see Android R’s  Developer Preview hitting the Pixel owners in two months. We recommend to try the DP’s only if you have a spare phone as the early releases may have a lot of bugs, and in the worst case, it might render your phone useless.

We also witnessed leaks of Pixel 4A, which is going to be Google’s next budget offering. Last year, Google sold more Pixel 3A’s than their flagships Pixel 3/3 XL, and it seems like this year is going to be no different. According to the leaks surfaced online, the Pixel 4A will have two variants (One with Snapdragon 730 and another one being a 5G variant with Snapdragon 765). The “XL” variant’s existence is not yet confirmed as there are rumors of Google ditching it.